You are here: Home / Christian Life / When God Says “Go”…and You’re a Hot Mess
Being a mom is the toughest job you never trained for (but you can do it).
Get premium content for Christian moms.
SIGN UP FOR FREE

This is a book review for When God Says “Go” by Elizabeth Laing Thompson, which is all about rising to challenge and change without losing your confidence, your courage or your cool. Read on to learn how you can win a signed copy! 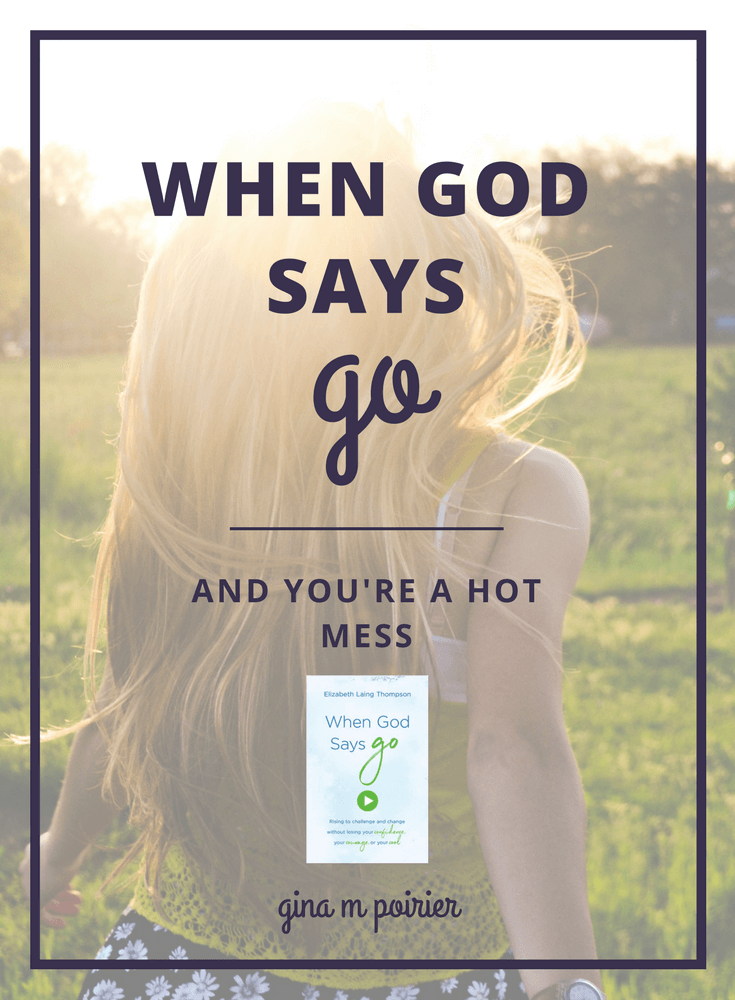 Disclosure: this post may contain affiliate links, which won’t change your price but will share some commission. See here for more information.

My hand shook as I held my cup of water. Was my heart racing too? It was late afternoon and I wondered if perhaps I’d had a little too much caffeine.

I couldn’t focus. I was meeting my friend at a local coffee shop to talk about her, but all I could think about was myself. I was worried, replaying conversations in my head and calculating worst-case scenarios.

She sat down with her salad and looked up at me. I realized at that moment that this conversation wasn’t going to go at all the way I had planned.

It wasn’t the caffeine. It was anxiety, which was starting to boil over into full panic.

Tears filled my eyes as I decided to forget agendas and just be real. Big things were unfolding in my life. They were good things. But, they were big, scary things like moving forward in an international adoption and making weighty decisions in my writing career. I was scared.

I wish I could say that this was months ago and that I have figured out how to deal with my fears. But this was just a few days ago.

Sometimes, especially when your days are full of diaper changes, wiping noses, schoolwork help and dishes, the speed of life can feel like a crawl. But at other times you find yourself on or about to get on a roller coaster, and there will a point when it will be too late to get off.

This is what it feels like when God says, “Go.”

It just so happened that the rumblings in my life started happening right when I received this book in the mail:

Needless to say, When God Says “Go” spoke to me.

Related posts: 10 Bible Verses About Anxiety and How I Manage Anxiety with 5 Calming Steps.

My friend Elizabeth is a funny, passionate storyteller who brilliantly looks into the Bible and brings to life what it was like for everyday people to interact with God. Through their imperfect, emotional and often comical reactions, he brought his ultimate plans to fruition.

The people we read about in the Bible are just as human as you and I. And the God who worked with them is the same one who works with all of us. Elizabeth relates their stories to everyone’s.

To be clear, a call from God today isn’t an audible command. Usually it’s a combination of circumstance, advice, biblical truth and gut feeling/Spirit prompting. (The book explains in further detail about how to clarify whether God is prompting you or whether you’re just having indigestion.)

Whether God is saying “go,” “stop,” “stay” or “proceed with caution” to you right now, Elizabeth’s deep digging into the biblical narrative has some thoughtful and encouraging insight. While there were many points that were helpful to me personally, three especially stood out.

By the way, Elizabeth has another great book called When God Says “Wait,” which I also highly recommend.

I’ve noticed a trend when I hear people talk about “God’s call” for their lives (and I fall into this trap as well). We can focus a lot on what he wants for us, without spending much time thinking about what he wants, period. We can get sucked into obsessing about our own gifts and dreams and whether we’re living to our “full potential.” Those aren’t bad things to wonder about, but they’re really secondary to God’s ultimate purpose: to redeem and restore all of creation. He’ll do that with or without our help.

There were more than a couple of people in the Bible who objected when God came knocking: “But God, I’m too young/old/wounded/fearful/inadequate.” Elizabeth talks about how Moses was terrified to go back to Egypt and help free the Israelites. What’s interesting about God’s pep talk to him is that it wasn’t about how great Moses was. Instead, God said, “I will be with you.” And that was all that mattered. 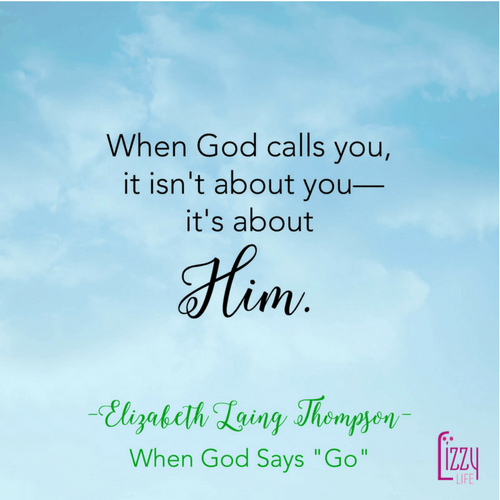 As I take my big scary steps forward in the direction I think God is calling me, I already know that I will be inadequate for the task. However, this is irrelevant. I can be faithfully confident that because of Jesus’ promise in Matthew 28:20 (“surely I am with you always”).

2. It’s Normal to Have a Range of Emotions and Responses

I know there are a couple of instances of ridiculously holy people in the Bible who responded to God’s call with enthusiasm and confidence. However, there are many who did not—in fact, I’d say most didn’t.

Some people had even had triumphs of faithfulness in the past, but because of the trials and pain of life, they faltered later. Mary, Jesus’ own mother who had humbly accepted her role to give birth to the savior, later doubted and questioned Jesus’ ministry—after all she had seen in her miracle baby! The apostle Peter as well had some pretty epic stumbling, even after having walked with Jesus and given up everything to follow him.

I’ve had times in my life where I didn’t question God’s will as much and cheerfully got on board, like when I had the opportunity to do mission work in Alaska right after I graduated college. At other times I’ve been anxious, doubtful or downright rebellious about the directions God has led me. These are all normal responses and, while we have to battle through them sometimes, our emotions won’t deter God’s plans. The good news is that while we might be a hot mess, he will remain consistent.

3. Sometimes the Only Way Out Is Through

This is a message I’ve been hearing over and over again recently. By nature I avoid conflict, vulnerability and painful circumstances. I’m pretty good at side-stepping problems. But as I’ve learned the hard way, sometimes the only way to get past your fears and problems is to work through them.

Elizabeth gives the example of the story of Esther, the queen of Persia (secretly Jewish), who was living pretty comfortably until she discovered that her own husband had agreed to annihilate her entire people. Here choices were to not act and watch her people die, or act, and possibly die herself, without helping the situation.

The story, of course, ended with her courageously taking action, as terrifying as it was. And I think that’s where I am in my current situation. When there’s nowhere to go but forward, your only option is to grow.

We cannot run from these situations. Some are griefs that feel past bearing, past surviving—and yet we must bear them. The only way out is through. And in situations like this, God is saying, “Grow.” He gives us no choice but to move forward. No choice but to change (When God Says “Go,” p. 101).

Is God saying “Go” to you in some way right now? Then I’d like to give you the chance to get a signed copy of Elizabeth Laing Thompson’s latest book!


When God Says Go will be officially released on May 1. Grab your copy now and get some awesome bonuses by clicking below.

Leave a comment: how is God saying “go” in your life, and how are you responding?