You are here: Home / Christian Family / What If My Kid Is The Bully?
Being a mom is the toughest job you never trained for (but you can do it).
Get premium content for Christian moms.
SIGN UP FOR FREE 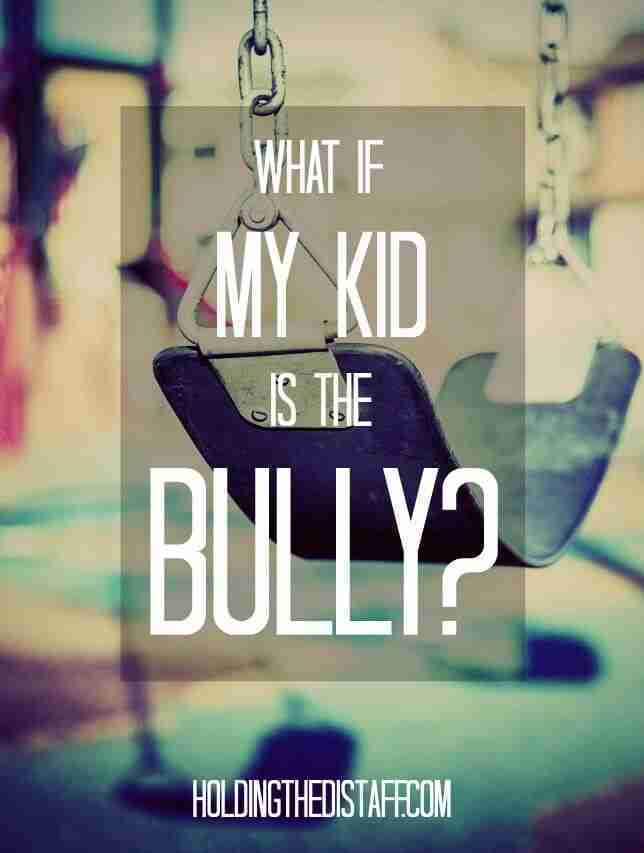 The other day I had one of those moments that no parent ever dreams of when they hold their newborn baby in their arms.

The neighbor knocked on the door. She was standing next to her young son, whom I know well. Her face was clearly vexed.

“I’m so sorry to bother you…” She went on to explain how her son had been bullied at the park. After being teased, he had gone home crying. And guess who the culprit was?

And to make it worse, I had been down on the playground earlier and didn’t pick up that this was going on. Our house sits adjacent to a neighborhood park, so sometimes I let my boys play while I loosely keep an eye on them from the back window. When I had gone down to check on them, there was some typical playground conflict going on. My son played dumb like he wasn’t involved in what was going on, and I believed him.

But then this little neighborly visit happened.

Ugh. My mommy infuriation gauge was over the top.

This situation felt like a punch in the gut, but we were able to turn it into a crucial learning opportunity. While I was disappointed in my son’s choices, I’m nonetheless glad that my neighbor came to tell me about them. My husband and I had some great conversations with him and his brother (who also saw it happen and mimicked the older kids with the teasing), and I think we set a good precedent.

There’s a lot of information about bullying going around these days (like this infographic). In my observation most of it is focused on the victims. In the worst-case scenarios, victimized kids can engage in tragically self-destructive behaviors. So it’s good that we’re giving victims a voice; they need to be heard. I myself was bullied in adolescence, and it left some very painful wounds for years to come.

But what about those bullies? Who are these kids? How do we stop them?

Bullying starts young. In the group that was involved with our neighborhood situation, the youngest is 5 and the oldest is 11. In this case, an older child started it and the younger ones followed his example. The victim himself is 8.

In many scenarios bullying goes both ways (also the case in our neighborhood). One child is a victim, and so they turn around and bully someone else. It’s complicated. In high school, do you know what I did? I joined a clique and we snubbed other kids. Just like I had been snubbed as a preteen.

Parents, let’s not get caught off guard by bullying. My kids are homeschooled, for goodness’s sake, and they’re not immune to this problem. Neither are yours.

What To Do When Your Kid Is A Bully

The sooner that you can talk about this issue, the better. Bullying begins right around the beginning grade school, when kids start choosing their friends. And while the kids involved might not totally understand what they’re doing, they are certainly capable of talking about it. Here’s what we’re doing to address bullying.

In these complicated social situations when there’s usually more than one person at fault, it’s tempting to throw up your arms and just say kids will be kids. With that mentality, people might just continue to act like kids well into adulthood (oh and they do)! While we understand that they are indeed children, they eventually need to be adults who know how to behave. Civility must be taught. My son knew he was in big trouble when I called him in. I was very calm, but we had a long talk. Later he had a long talk with his dad. We were exhausted when we were done. Because it was a big deal.

I made sure that my son knew that our neighbor went home crying when he teased him. I asked him how he would feel if they were treated that way. We talked about Matthew 7:12: “So in everything, do to others what you would have them do to you…” We want to cultivate a heart of compassion in our kids, and this was just one opportunity to do that.

3. Talk about choices, right and wrong.

My son wasted some of his breath trying to justify his position, but in this case we tried to help him see that he made a choice that was flat out wrong, disobedient and unkind, end of story. The situation was complicated, yes, but his actions were not. In the end he took full responsibility for his decisions and the way he treated another person.

In our particular situation, my son tiptoed around the truth the first time I confronted him. I had to get the whole story from the neighbors. It’s natural for kids to want to hide the whole truth when they know it will get them in trouble—and we have to jump on that. I want my kids to know that that a half-truth is a lie. And lies are a big deal.

Having said that, we also need to be a safe place for our kids to come to. We praise full honesty and if one of our kids initiates a confession, they receive much mercy.

5. Talk about peer pressure and courage.

Peer pressure is something we are constantly talking about anyway (isn’t everyone?). It always seems like it’s the other kids convincing ours to do the bad stuff right? 😉 At any rate, we encourage our boys that it takes courage to stand up for what’s right. One way to do this is to talk through imaginary scenarios and ask how the kids should respond. Different Bible stories can be illustrative too—like one of their favorites, David and Goliath.

You better believe my kids apologized profusely for what they said and did. We also let our son know that we loved him and forgave him.

Unfortunately, bullying is usually not an isolated event. I’ve been checking in on the park situation regularly and asking my kids a lot of questions about what’s happening and how they’re responding. I know that as they get older I’ll have less and less direct oversight in their lives. However, if we’re in the habit of talking about these things now, it will be more natural to talk about the even more difficult situations that are bound to come up later.

8. Work with other adults.

Even though it was slightly embarrassing, I’m indebted to my neighbor for talking to me. It’s tough because no one wants to be “that mom” who is always coming to her child’s rescue over every little thing. But there are times when conversations need to be had. I know way too many people who resort to gossip and passive aggressive behavior. We’re the adults here, and our kids are watching and imitating us. Facilitate open dialogue with parents, babysitters, teachers, coaches, etc.—especially when it comes to bullying and safety issues.

9. Don’t solve your kids’ problems for them.

In these situations, whether our kid is the bullying victim or the culprit, it is very tempting to step in and be the savior. This is exactly what they don’t need. While as parents we need to be actively engaged and coaching them, we still have to give our kids the freedom to figure it out. That’s why I’m continuing to watch my boys from a distance while they play. I trust that they’ll tell me anything I need to know (and if not, the neighbor will!).

The day after the incident, my son told me he was almost too ashamed (his words!) to go outside because of the way he had behaved towards his friend. But then he went out anyway. And they had a good time.

It’s obvious there’s a big bullying problem in our society, which is now heightened by social media as kids get older. It’s complex; many kids who are bullies are also victims. Addressing it starts with the parents and it starts young; from there we can engage other caring adults in our kids’ lives. Don’t ignore bullying; don’t get blindsided by it. Be ready to teach and talk with your kids about it as long as they are under your roof.

Have your kids experienced bullying, on either side of it? What’s your approach to handling it? Leave a comment below or on social media!