You’ve probably heard about the “Proverbs 31 woman”—this icon of Christian womanhood—but how much do you really know about her?

The more I’ve studied her, the more I’ve discovered that many people don’t really understand this intriguing passage of Scripture. Have you believed any of these myths? 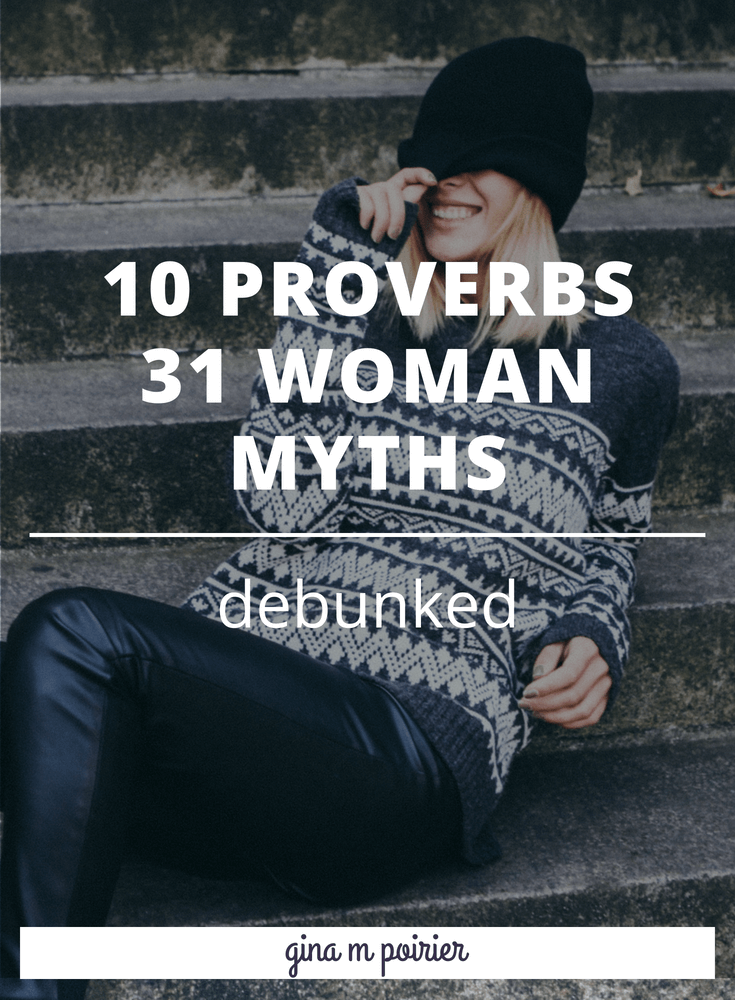 Disclosure: this post may contain affiliate links, which won’t change your price but will share some commission. See here for more information.

We’re all living in the shadow of that infamous icon, “The Proverbs 31 Woman,” whose life is so busy I wonder, when does she have time for friendships, for taking walks, or reading good books? Her light never goes out at night? When does she have sex? Somehow she has sanctified the shame most women live under biblical proof that yet again we don’t measure up. Is that supposed to be godly—that sense that you are a failure as a woman?

— John and Stasi Eldredge, Captivating: Unveiling the Mystery of a Woman’s Soul, p. 6.

Oh, the “Proverbs 31 woman.” I have a bit of a fascination with her, and so do others. Ministries and businesses are named after her.

Some women love her. Many aspire to be her. Others feel guilt and worthlessness; some despise her.

Do we really understand her?

Captivating (quoted above), by John and Staci Eldredge, is all about women living to their full potential, the way God created them to be. It’s worth reading if you want to explore the heart of biblical femininity. The quote pretty much slams the near-goddess status of Mrs. 31. It says, “she has sanctified the shame.”

But has she? Or have we?

I don’t think the Eldredges’ intent was to pick apart the woman herself (this is in the Bible, after all), but rather to pick apart the common way she is perceived. And I agree that this idea of a woman who is too good for the rest of us to imitate is a false understanding of biblical womanhood.

The more I’ve dug into Proverbs 31, I’ve discovered that I was missing much of what it communicates. It is difficult to understand at face value, which is why I think so many of us have a knee-jerk response when we read it.

Want to understand this passage better, and ditch the guilt and shame? Throw out some of the following myths.

Want to do some more in-depth study? Be sure to to check out this 7-day devotional on the Proverbs 31 woman called Woman of Strength, which you can find in my free resource collection.

1. Proverbs 31 was written for young wives.

Who do you think this passage was originally written for? You might be in for a shock. It was written for a young man. It is not an instruction manual for wives; its purpose is to provide a young man a vision for what he should look for in a wife.

It makes a lot more sense when you view Proverbs 31 as what it was intended to be—an epilogue, a conclusion—rather than a stand-alone passage. Proverbs is a collection of sayings that contrast wisdom with folly; many of them are written as warnings to young men to let wisdom and godliness guide them instead of their lusts.

That’s not to say that there aren’t applications for women; why shouldn’t we aspire to the godly characteristics displayed here? But the purpose of the passage isn’t to provide an impossible standard; it’s to provide inspiration for the possibilities.

Wouldn’t we like to know whether the person portrayed here was a flesh-and-blood being? I think it’s possible that someone, or more than one person, was the real-life inspiration for these words—otherwise, why would you instruct a man to marry an ideal woman who couldn’t exist? But on the other hand, the Proverbs 31 woman is the fourth somewhat allegorical female personage in the book of Proverbs (following Wisdom, Folly and the Adulteress). So there may have been some creative liberties in describing her, even if she was real.

If you’re wrestling with this question of whether or not she was real, my question to you is, does it matter? Sometimes the Bible uses real people to communicate truth and sometimes it uses symbols and parables. That doesn’t change the core principles of the message being communicated, which we’ll explore.

3. She has always had her act together.

When I was a newlywed I barely knew how cook. But I wanted to be great at it because I knew it would make my husband happy. One time I made blueberry muffins—my husband’s favorite—and left out the baking powder. Ewwww. Rookie mistake. I was devastated and he was bewildered as to why his wife was crying over something so trivial. Fortunately, I rarely (not never!) make that same mistake anymore.

Being a competent wife/mother/homemaker/whatever takes time. It doesn’t matter how hard you try or even how naturally talented you are; you will only learn through experience. Proverbs 31 is not a snapshot of a newlywed. This woman has been married long enough to have multiple children and run a couple of side businesses while skillfully managing her household. In other words, she’s older.

Remember, if this was written to a young man, he probably wasn’t going to go out looking for a forty-year-old with lots of life experience. He was going to be looking for someone young who had the potential to grow into that mature, godly wife. Keep that in mind as we continue.

Related: How Moms Can Live with More Balance: 5 Lessons from Proverbs 31

How in the world can someone get up while it is still dark to make everyone breakfast (v. 15), and yet “her lamp does not go out at night” (v. 18)??? Certainly every mom has some sleepless nights like that, but the passage seems to imply an ongoing state.

This is where cultural insight is useful. How would you get around at night if you didn’t have electricity? An oil lamp would come in handy if you had to use the latrine. It’s common in societies without electricity to leave a lamp burning at night, even while you sleep, so people don’t have to fumble around in complete blackness (source).

So why is it significant that her lamp does not go out? Consider verse 18 in its entirety: “She sees that her trading is profitable, and her lamp does not go out at night.” Her side hustles are making enough money to keep everyone comfortable! She is also wise enough to ration the oil so it doesn’t run out (see the Parable of the Ten Virgins in Matthew 25).

5. Every wife and mother should aspire to live like her.

Consider this: the family in Proverbs 31 is making enough money to employ servants and have nice clothes. This is in part because of Mrs. 31’s side businesses, but it’s also evident that her husband is a man of standing the community, hanging out with the elders (v. 23). She is also in excellent health as far as we can tell.

Not everyone is blessed in these ways—with wealth, health and privilege. So would this passage not be relevant for them (most women in the world, actually)? Are you any less godly if you’re poor or in bad health? Of course not.

You have to look past the specifics and more at the principles.

Does she really “do it all”? Nope. This lady has servants.

I used to think, “Well, if I had servants, maybe I could do all of that too.” Granted, many of us in Western society have “servants” in the form of modern appliances, but if you’re dwelling on these thoughts then you’re missing the point of the passage. Most people in the world do not have servants, yet this passage is relevant for them. Again, you have to look past the specifics and more at the principles.

7. She never stops to rest.

How do I know? I’m fairly confident that someone upheld as a God-fearing woman in the Old Testament would observe the Sabbath. This didn’t mean just going to church on Sunday; this meant complete rest. No cooking. No cleaning. No gardening. No sewing. You couldn’t even walk more than half a mile! You had to sit and enjoy being with your family all day. Just imagine.

Have you ever tried observing a Sabbath like that ever, let alone regularly? While I don’t believe Christians are required to observe this old law, we probably could learning a thing or two about chilling out from Mrs. 31.

Related: How To Manage Stress by Being Productively Lazy

8. Proverbs 31 has no relevance for single women.

As a single woman more than a few years back, I was completely befuddled by this passage and assumed it wasn’t for me anyway. So I essentially ignored it. That was my loss.

Is this passage only for wives or only for women who want to be married? Absolutely not! Let’s start talking more about the principles of this passage, which are about character, not deeds. More specifically, “noble character.”

The only other time this phrase appears in the Bible outside of Proverbs is describing Ruth (Ruth 3:11). Who was Ruth? It’s a quick read in the Old Testament, so I’d recommend checking it out if you never have. She was a real person, she was single and she was she was dirt poor. She wasn’t trying to catch a husband; she was doing whatever she could to survive.

Hardly the same circumstances as Mrs. 31. And yet these women have identical character qualities. Single or married, we should focus on those.

9. This passage is irrelevant to the modern woman.

I hope it’s evident by now that it shouldn’t matter whether you’re rich or poor, married or single, young or old, living in modern America or in a hut in the jungle; when you’re focusing on the principles of the passage and not the circumstances, there is much to take away. These timeless, cultureless principles include love, generosity, work ethic and faithfulness.

One question that might hinder you when you consider Mrs. 31 is, “How does she do it?” But unless you enjoy feeling insecure about your talents and stamina, that’s the worst kind of question you can ask.

We should be asking, “Who is she?” Not her name or her place in history, but what is the essence of her being? That question is the right one when we’re trying to determine the core principles of the passage. And the answer is quite simple. She is a woman who loves God (v. 30). Her character, her wisdom, her self-discipline—all of these qualities flow from this fact.

I hope you’ve found these insights useful as a you figure out who you are. Whether you’ve loved her or hated her, I also hope and pray that you can find the incredible inspiration at the core of Proverbs 31.

Want to learn more about what it means to be a woman of strength like Mrs. 31? Check out the Woman of Strength devotional, one of the many resources you’ll find in my free resource collection.

What do you think about the Proverbs 31 woman?