You are here: Home / Christian Family / Parenting Tips / Potty Training Boot Camp
Being a mom is the toughest job you never trained for (but you can do it).
Get premium content for Christian moms.
SIGN UP FOR FREE 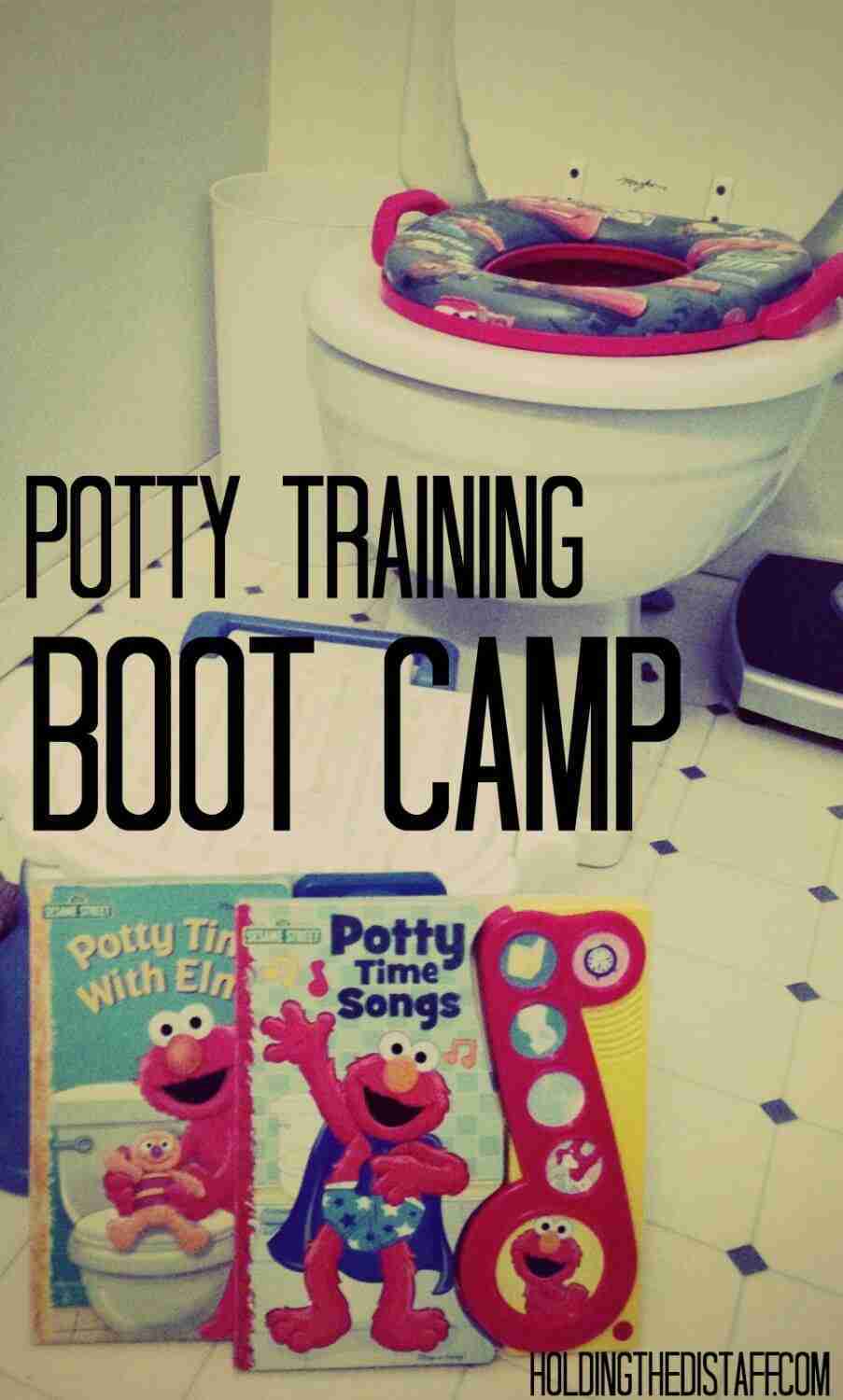 In another bout of pregnancy-induced insanity, I made an interesting decision a few weeks ago.

Here’s the question I was forced to answer. For my 25-month-old son Jonathan, should I force potty training before baby (due in two months), or put it off until…indefinitely?

I’ve written about potty training before. With my oldest son about a year and half ago, we kind of figured it out was we went. I also did an experimental run a few months ago, and failed miserably.

For some reason the hormones convinced me that I could do it this time.

But guess what? It worked! He was mostly trained in about a week.

Thus I give you: Gina’s proven potty training method for a young toddler. I hope you find this useful if you have a little one running around!

Please note that this might not work for everyone. Not every child is alike, and not every family has the same schedule and setup as we do. However, I based this method on solid principles I’ve read about as well as the advice I’ve sought from several veteran moms. I think that if your child is ready and you stick with it, you can make this happen.

Get rid of diapers during hours awake—switch to cloth shorts or underwear. Spend an intensive day with toddler and take him to the training potty every time he starts to make a mess. Teach him how to pull his own pants down and practice every time he has an accident. Follow up with training over the next few days. Toddler will catch on.

Okay, so in spite of what might be implied by this post’s title, I have to confess that I would be am a terrible drill sergeant. Especially with my lovable sweet cuddle child. However, for this reason, the potty training experience was not terrible; we bonded over it and got a lot of one-on-one time together.

I’m going to break down what we did (loosely) by day. Most of the important stuff happened on the first day.

Also note a few things that were in place prior to intensive training:

I dropped the older brother off at Grandma and Grandpa’s house (very important!) and then set up potty world in our kitchen—a training potty, his little table, and lots of little activities and books we could access. This gave us a lot of space, easy cleanup and access to food. I offered Jonathan a lot of salty snacks and encouraged him to drink a lot of juice. This was a big treat for him, so potty training was off to a good start. Not to mention—he doesn’t get a lot of alone time with Mommy.

The diaper came off and I grabbed a big pile of shorts. We started the morning by spending a lot of time just sitting on the potty and practicing pulling the shorts up and down. To get him to stay seated we read books and sang songs (some recommend not doing this because it distracts from the task at hand; but seriously how else do you get them to sit?). He’d roughly spend about ten minutes on and ten minutes off. Inevitably he got some pee in the potty. This was rewarded with lots of praise (and even a cookie…shhh).

Once it was clear that pee went in the potty (after about an hour), I started making it unpleasant if pee ended up anywhere else. It wasn’t “punishment,” but more of an opportunity to “practice.” I’d ask him if his pants were wet or dry. If they were wet, he had to walk to the potty, pull his pants down, sit down and then up again, pants up. Repeat ten times. Yep, ten times. With minimal assistance. The novelty wore off quickly, and he realized this was not the way he wanted to be spending his time. (I followed the method described in Toilet Training in Less Than a Day. I didn’t follow the method exactly, but pretty close).

At naptime he got a diaper and we both got a break! Whew!

By the end of the day, Jonathan had at least figured out how to hold his pee for a couple of hours, so I let him roam free outside of the kitchen. I moved the training potty back to the bathroom. It wasn’t so bad cleaning up a small mess every couple of hours, especially since the shorts absorbed most of it.

I dropped the whole ten times practice routine on Day 2 because it was starting to traumatize us. Maybe he would have trained faster if I hadn’t, but like I said, I’m a bad drill sergeant. Instead, I just gave him a disapproving look and told him to go sit on the potty every time he was wet. He got the message. I also switched him to underwear so he would get used to the feel of it. In fact, he and James had an “underwear party” for a few days. Whatever made it fun.

Jonathan typically stayed dry for two to three hours. He still had a lot of regular practice time on the potty—it was sort of a game involving more books and songs. More often than not, though, he still had accidents. But he started taking himself to the bathroom after accidents and told himself “no, no…no messes” whenever they happened.

At some point we switched from the small potty to the big potty, with a Cars 2 training seat on top. He seemed to like it better — and I’m all for less cleanup.

I’ll also mention that he saved his BMs for when he was wearing a diaper, immediately before and/or after sleeping. Wasn’t sure what to think about that.

I was seriously contemplating giving up, but then…a light bulb went off! He somehow figured out how to get to the bathroom before he had to go. And he hit the toilet (with some help aiming…still sitting down). Hooray! From here on, it got a lot easier. He still enjoyed doing a lot of practicing, just sitting on the toilet. This was getting pretty old for me.

I gradually made potty time less of a game and more about getting down to business. If I knew he had an empty bladder, I wouldn’t sit and sing songs or read books with him.

Jonathan finally got over his phobia of pooping in the toilet and dropped one.

Our first successful use of a public bathroom! Wasn’t so bad….

I am totally confident taking Jonathan anywhere without a diaper (although we haven’t done any long car rides yet). He tells me every time he needs to go. Accidents are more about bad aim than forgetting to go (I tried the whole cup on the front of the seat thing, and it doesn’t matter…). He still seems to have a poop phobia, but at least he’s going in his diaper and not his pants (with the exception of one time). And yes, he’s still in diapers for naps and bedtime, but I’m not too concerned about that.

Overall, this method was intense, but I’m definitely doing it again! It was worth every minute. I realize that he may regress once the baby is born, but at least we’ll have a solid foundation established.

It has been almost three years now, and I’ve enjoyed reviewing this little experience. If I remember correctly, Jonathan still struggled with the potty for quite some time, especially after his baby sister was born. I had to remind him to go fairly regularly until he was about three.

I also used this method on my daughter around the time she turned two. It was a very effective way to jumpstart her and she caught on to peeing in the potty very quickly. However, she has had quite the phobia with poop. I don’t force it, so at almost three she’s still in a Pull-Up. But at least it stays dry most of the day!

If there is one thing I’d say in hindsight, it is simply that this method is effective for jumpstarting the potty training process. Each toddler is going to respond differently. Some of them just aren’t mature enough to be fully trained; just remember it’s okay. If it doesn’t work, try again later. Don’t stress about it. They won’t be in diapers forever! You might even miss diapers someday (nah, just kidding).