You are here: Home / Christian Family / Why We Don’t Pay Our Kids To Do Chores 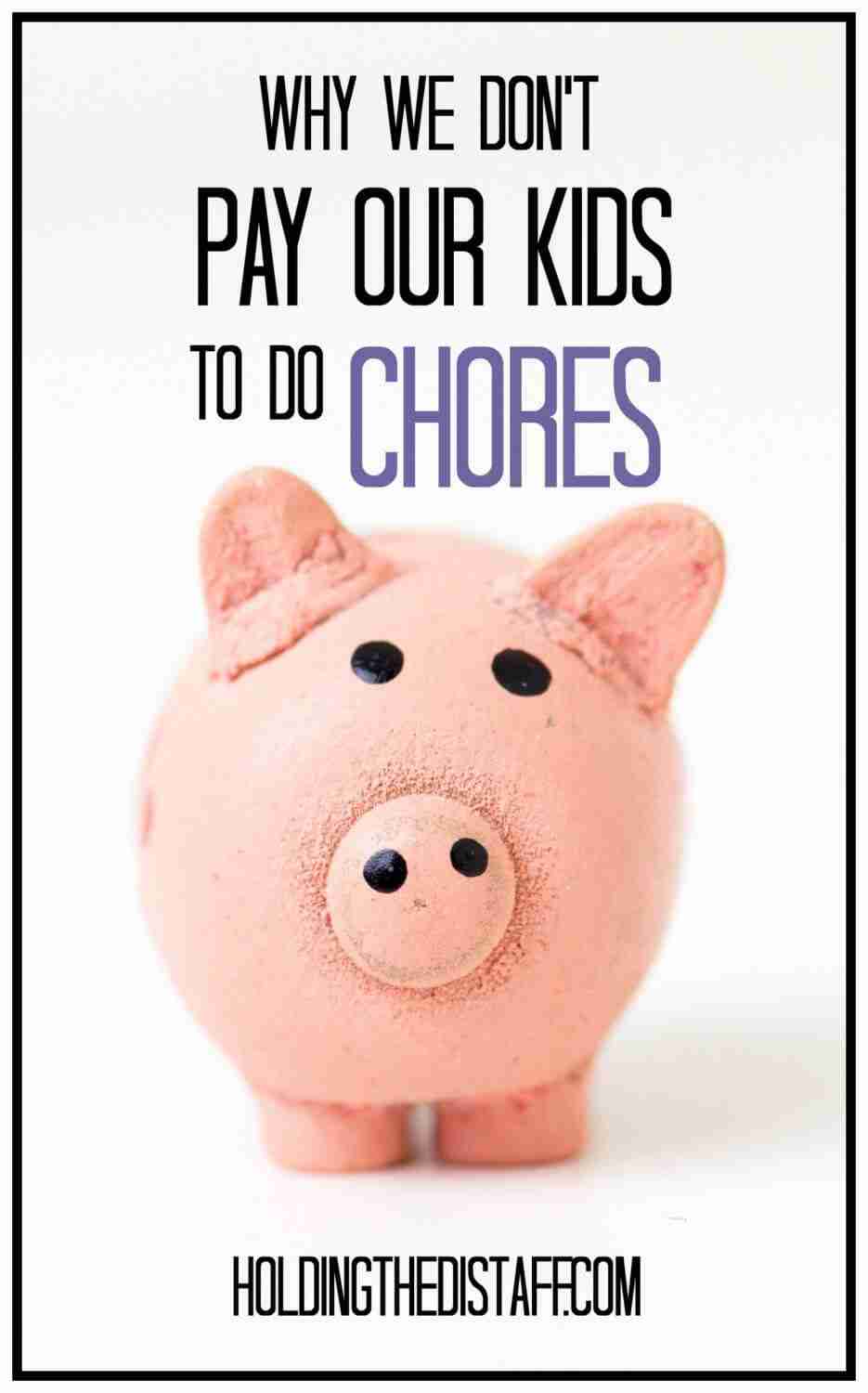 A $3 pack of gum. This is the type of thing that seven-year-olds dream about, scrimp and save for, apparently.

Well, at least mine does. He schemed all week to get his little fingers and a pack of Ice Breakers (Mom doesn’t splurge for that kind of thing). It brought him joy for days—and incurred a little bit of jealousy from his siblings. But it was his, all his. He’d pop two pieces at a time, for maximum bubble surface area. He was generous with some of it, so others could experience the bubble bliss and share in his happiness.

I think managing money and possessions is an important thing for kids to learn, starting from a young age. Around the time my oldest turned five, my husband and I started talking about allowance and how we would start teaching this valuable life skill.

Some of this we’re figuring out as we go, but one principle we came to quickly was this:

We will not pay our kids to do chores. Furthermore, we don’t use any sort of reward system to motivate them to help out around the house.

Linking allowance or other rewards to household duties is a common practice in American homes, so you might find this surprising—bold, even. But I am firmly convinced that this practice isn’t a wise choice for our family, primarily because it could send the wrong messages to our kids.

I know that not everyone will agree with me on this, and that’s okay. If you practice this I don’t think you are doing something that is inherently evil. But, whether you do it or you think you’d like to, I’d ask you to take a moment and consider why we don’t.

The Value of Helping Out

With two kids who are school age, chores are built into our morning routine. Based on the day of the week, they help out with wiping countertops, putting away laundry and even cleaning the toilet (yes!!!). And most days, they do it!

In both of our homes growing up, my husband and I helped out around the house because it was an expectation. Period. If we didn’t do it or had a bad attitude about it, we had to have long, unpleasant conversations with our parents. It was not worth the trouble, most of the time.

Likewise, we want our kids to do there chores because that is what you do when you are part of a family. It is a reward in itself; you have a home to live in, so help out and take care of it (with age-appropriate responsibilities). If my kids are doing their chores primarily because they want to get a material reward, they are missing out on a character growth opportunity. When they’re not doing what I’ve asked them to, or if they complain about it, we have a little heart-to-heart during which we talk about my expectations: that they honor and obey me, and that they contribute to our household.

I admit that it takes some work to reinforce these concepts and address the attitudes of the heart. I think it actually might be easier if I had some pretty sticker chart and weekly rewards. But it’s worth the extra effort. Some great scriptures that I recommend using with your kids include Philippians 2:5–­8, Colossians 3:23­–24 and Matthew 5:41.

Clinical psychologist Erica Reischer, writer for The Atlantic (see this article), says that an environment in which people expect to receive something for their work is called a reward economy: “In reward economies, kids learn to trade desirable behavior for a reward.” The problem with this? It affects how kids think about relationships.

Reischer says, “Offering children tangible rewards in exchange for caring behavior can erode their innate tendency to help others.” Kids start looking at family life as an economical realm (a market), rather than a social realm. Instead of learning how to be part of a team, kids who are constantly offered a reward start wondering, “What’s in it for me?” That’s the exact opposite of what I want!

By using reward systems, we could be inadvertently teaching our kids that they deserve a reward for everything they do. I could see that causing all sorts of problems if they carry that attitude forward in life—in college, in their careers and in their relationships. Don’t get me wrong, I like accolades and I think we all need them at times, but the reality of life is that you have to give without expecting anything in return—a lot!

Hi, I’m Gina and I’m a perfectionist. I love keeping score and I feel horrible about myself when I don’t measure up to any standard that is put in front of me. And one of my kids is just like me.

Reward systems are horrible for perfectionists. They reinforce our pride as well as our insecurities. They don’t help us to perform our best; rather they tend to highlight where we fall short. I know we can’t avoid them entirely because we live in a world with things like grades and performance reviews. But I don’t think they’re desirable within the home.

I realize that not every child has this issue but trust me; if you have a perfectionist from your family, you want to run from this kind of system (read here for what works better).

Are Rewards Ever Okay?

Well, to seemingly contradict myself…I actually think yes. Like I said earlier, I don’t think using rewards is inherently evil, and there are in fact some reward systems built in to the real world.

Last week I was at a homeschool training class for co-op facilitators. Our trainer said that she used a simple reward system by quietly handing kids a block when they were on task and taking blocks away when they were off task. At the end of the semester they received goody bags. Throughout the year she used the system less and less. By the end of the year they hadn’t used the blocks in many weeks. She told her kids that they were doing a great job—they didn’t need the reinforcement! And she gave them goody bags because she loved and appreciated them.

I loved this example because the reward system was used for initially training good habits rather than indefinitely. It wasn’t a constant motivator. And in that sense, I think rewards can be useful: for training. For us, however, we’d like to keep money off the table and avoid making such systems and integral part of our disciplining at home. Occasional, limited use for training in new skills might be okay.

So When Should Kids Get Money?

Our kids get a weekly allowance that increases with age. It is not connected with performance; they get it no matter what (unless I’m out of cash!). They also get money for birthdays, and a rather generous tooth fairy frequents our home. They don’t get a lot, but it is more than enough for fun purchases like awesome bubble gum. Beyond that they have everything they need and then some.

Our kids will have plenty of opportunity to earn money when they get older and can get real employment. Contributing to your own home is not a job; that is real life. We like to give to our children (although not spoil them) because we love them and we want to take care of them. This is the way I believe God treats us (Matthew 7:9–11). I don’t ever want them to feel like they have to earn my love or approval with their performance (perfectionist issues!!!).

Okay, it’s your turn. What are your thoughts about reward systems in the home, especially with money?