My husband made me an omelet this morning. He makes really good omelets.

The kids had already eaten, as they are always starving from the instant their eyes open every morning. So this was a treat for Mommy and Daddy.

I reached into the cupboard to grab a coffee cup. Omelets are not complete without coffee. A very special cup caught my eye. I don’t use it often because of a small chip on the rim. It was a wedding present — it’s white and says “I do” on the outside. It pairs with another cup, brown, that says “Me too.”

Today is our sixth anniversary, so it seemed like the most opportune time to use the chipped cup. I treated myself to chocolate mint coffee creamer, sat at the table, and held the warm cup in my hands. The steam rose slowly and provided a sense of calm. 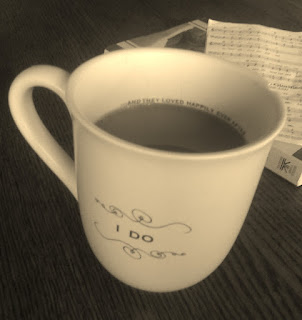 As any mom knows, “sense of calm” never lasts for more than three seconds with small children around. Jonathan climbed into his booster seat, eagerly eyeing my plate. Kids are never full if they see you’re enjoying something that is clearly more delicious than what they just ate. He received a piece, which he never finished. James suddenly needed some omelet too (which he ate very eagerly).

“A lot has changed in six years!” I grinned at Marc.

At least they didn’t ask for my coffee.

I fixated on the cup as we finished breakfast. I don’t remember how the chip got there. I’m extremely clumsy and we moved across the county—those two factors practically destined the cup for injury. But the chip gives it a personality. It’s symbolic, can’t you see?

I love Marc and I love our marriage. Of course it’s not perfect—we have “chips”—but that’s not the way that I want to look at it anyway. Why focus on a chip when I’d be missing the fuller picture of what I have?

So I smiled as the imperfections of the morning unfolded. Loud kids breaking into quiet moments, me forgetting to bring sheet music to church (see it on the table next to my cup???), a not-quite-clean house, choosing to eat chocolate for a snack after lunch instead of something a little healthier (darn Halloween candy).

Marc probably didn’t even regard any of those moments as imperfections at all. This is one of the reasons I married him. His perspective. He knows what he’s got — a full cup, whether he’s looking at his family, his marriage, or any aspect of his life.

What’s great about marriage (and family and life in general) is that all of those little chips don’t decrease its value. On the contrary, I can confidently say that what some might consider “imperfections”—bad decisions, poorly chosen words, hurt feelings—have ultimately brought us closer together and closer to God.

So lift your cups—here’s to six full years of marriage and many more to come. I love you, Marc!

I always get a little reminiscent at this time of year. Seven years ago, I was staying at a youth hostel in Philadelphia. I was with about 30 other colleges students and teenagers.

We weren’t just there to enjoy the city’s rich history, water ice and cheese steak (although we enjoyed all of that thoroughly). I had traveled all the way across the country to spend part of my summer break giving every ounce of love and energy I had to some kids on the streets of North Philly. Not exactly suburbia. This is what HOPE Youth Corps (HYC) was all about.

I arrived a little bit later than most of the other participants, maybe by about a day. I had to fly farther than most, and, since my school term ended in June and not May, I had finished taking my finals early before scrambling to the airport. I got to the hostel at night, just in time to join an opening devotional.

That’s when I first saw him. Marc Poirier. (How do you pronounce that anyway? It took me awhile to get it down). He was leading a song in front of a living room packed full of kids on a hot night – with more heart and passion than I’d ever seen. It’s not easy getting a group of people you just met to cooperatively sing a meaningful song, which they might or might not know. I didn’t get to talk to him that night, but he definitely intrigued me.

The next morning (although we’ve argued about this – he thinks it was evening), I had my first conversation with him. His epic first words after our introduction?

What an odd question to answer! After asking for clarity on what on earth he meant by that (he said it could mean whatever I wanted it to mean), I think I muttered something trivial. Then I asked in return, “What’s YOUR story?”

“I came here to find my heart.” He then went on to pour his guts out about all he had been through and was learning and hoped to find through serving over the summer.

Okay, what kind of guy talks like this? Especially one you’ve known for five minutes? While I would never have admitted it at the time, I think I was already hooked.

Before I get any further, I’d like to add that I didn’t come to HYC looking for a soul-mate. Quite the opposite: I had participated in one of these things before, and it drove me nuts when everyone got their little crushes. I’d think to myself (perhaps a little self-righteously) that we were there to serve, not flirt!

But on the other hand…

Service is what brought us together.

In the following weeks, we fund-raised together, worked long hours together and saw each other at our best and worst. We took a weekend trip to New York and served at another HYC site in Washington, DC. While finding a husband was one of the last things I thought I wanted at the time, I left completely smitten and in love. Despite distance and many obstacles, we were married a little over a year later.

As I’ve been writing this, I’ve pondered why Marc and I click. Part of it’s the chemistry, the common interests, and the strange sense of humor we share. Of course our relationship is centered on our mutual love of God. But what really gets us going, no matter what’s else is happening, is when we’re able to serve together. Service takes many forms – even as simple as having people over for dinner. It’s just what we do.

Today whenever I tell “my story,” a significant part of it includes some time I spent in Philadelphia in June 2005. That’s when I found my heart.